Dental elements are among the best preserved archaeological finds; the study of the teeth has therefore proved useful, over time, to deepen the evolutionary processes of animals and humans.

From this perspective, the studies of anthropology professor Debbie Guatelli-Steinberg of Ohio State University start. In his new book: “What teeth reveal about human evolution“, the American anthropologist outlines a broad overview of what scientists have learned about our ancestors thanks to the study of fossil teeth.

The study of teeth is essential to answer questions about: diet, history and lifestyle habits of our human ancestors.

Study of teeth and human life

In the study of the human species the teeth are a very important comparative tool, through the study of the teeth, their conformation and their wear, it is possible to reconstruct the various stages of evolutionary processes and characterize one species rather than another. 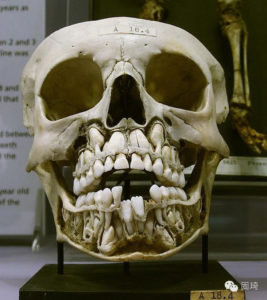 The evolution of the Hominini family, to which man also belongs, is very interesting. Taking into consideration the fossil primates, we note how the number of teeth present in the Proscimmie varies from species to species, going from a number of 44, with Purgatorius, lived about 70 million years ago, up to the 36 teeth of the primates lived in the Eocene.

With the appearance of the great anthropomorphic apes, about 35 million years ago, the number of teeth stood at 36 to 32. Today the oral cavity of a human being has 32 teeth.

Our teeth have adapted to allow us to follow the multiplicity of food regimes that we adopt today.

The chemical composition of the teeth also provided additional information to the researchers. Scientists are able to identify stable isotopes and traces of elements in tooth fossils unearthed by archaeologists. From the study of fossil teeth it is possible to determine the diet of our predecessors.

Even our diet is written on our teeth: our era is characterized by widespread caries problems and by the accumulation of plaque and tartar. Just as the widespread pathology of wisdom teeth included, which from the times of the industrial revolution to today has become ten times more common, will be particularly evident.

In fact, we are witnessing a progressive involution of the dimensions of the jaws to which is added an increase in the size of the cranial cavity. This leads to an increasingly frequent failure of the third molar eruption.

The study of teeth is therefore becoming increasingly central in the study of human evolution, thanks also to the very sophisticated research tools. Technologies such as microtacs in fact allow to study thoroughly also the dental pulp feels having to dissect the element. The analysis of the pulp of the tooth allows to have information on the diet and also on any trauma suffered.

The study of the teeth of the Neanderthal has, for example, brought to the evidence of the researchers the presence of oblique streaks probably due to the chewing movement and also to the presence of carbon particles, residues of foods cooked in direct contact with fire.

Teeth are a small part of our body and even a simple smile reveals a lot of us, so let’s not forget to take care of it.

The German Institute for Quality and Finance (ITQF) in a 2013 research called "service champions" making a comparison analysis of services and public satisfaction rating among health facilities and Italian companies and businesses indicates SANIDENT as one of the best clinics in Italy for the quality offered and patient satisfaction. - Source: Corriere della Sera articolo del 15 maggio 2013
High-protein diet: halitosis and other consequences

Implant failure: what can be the causes
Scroll to top