Pulpitis: because it is so painful 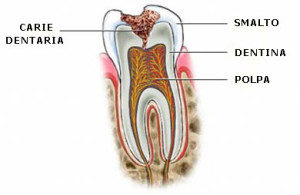 Pulpitis therefore is nothing more than an infection, probably generated by an ongoing and untreated caries, which has corroded the enamel and the dentine until it reaches the dental pulp. The first symptom is an acute toothache, due to the fact that the inflammation has affected the nerve endings causing excruciating pain.

In its most severe form, pulpitis can generate necrosis, or death, of soft tissues due to the lack of blood supply to the pulp of the tooth.

The causes of pulpitis

As already mentioned, the main cause of pulpitis is a neglected and untreated caries, but it is not the only possible cause. To give rise to pulpitis could in fact affect:

Poor oral hygiene is also the basis of the onset of caries. Not constantly treating oral hygiene promotes the proliferation of bacteria that give rise to infections. The infections in turn can expand and become acute within a short time. Think about gingivitis, the inflammation of the gums which, if neglected, leads to periodontitis.

The more inflammation spreads to areas near the tooth, the easier it is for the infection to reach the dental pulp.

Bruxism can also be a trigger for pulpitis. Grinding your teeth unconsciously, often at night, slowly leads to wear of the enamel and dentine. This favors the attack of bacteria.

The same danger to which the tooth is subjected in the event of a fracture, an enamel lesion can easily expose the tooth pulp to a bacterial attack.

Depending on the severity of the infection, reversible and irreversible pulpitis can be distinguished.

Symptoms and treatment of reversible pulpitis

Pulpitis in its reversible form presents a throbbing and intended pain that occurs in a localized area. Pain is often associated with hypersensitivity of the tooth itself. The cure in this case is to remove the origin of the infection, often a caries.

Symptoms and treatment of irreversible pulpitis

Not intervening in a timely manner can cause the passage of a reversible pathology into an irreversible one. In this case, the sensitivity of the teeth increases exponentially with thermal stimuli. The pain becomes acute and also extends to the head and neck.

In the presence of the irreversible type, the infected pulp must be removed by cleaning, disinfection and consequent closure of the root canal. The root canal treatment or devitalization of the tooth is almost always the best solution therapy, in fact it allows to preserve the natural tooth.

There are severe cases of tissue necrosis which could however lead to the extraction of the compromised tooth.

This type of intervention is accompanied by analgesic therapy that allows you to reduce pain and antibiotic therapy to treat inflammation.

Pulpitis, like other diseases of the oral cavity, can be avoided with greater attention to the rules of daily oral hygiene.

The German Institute for Quality and Finance (ITQF) in a 2013 research called "service champions" making a comparison analysis of services and public satisfaction rating among health facilities and Italian companies and businesses indicates SANIDENT as one of the best clinics in Italy for the quality offered and patient satisfaction. - Source: Corriere della Sera articolo del 15 maggio 2013
Gingivitis: causes and remedies of inflammation in the gums